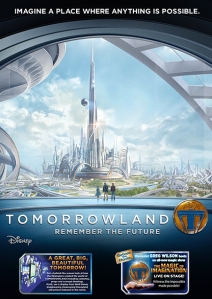 I grew up a hop, skip, and a jump away from Hollywood but somehow never made it to the El Capitan Theatre. Now that my son, Ryan, is 10 years old, I thought it was about time both of us had our first visit to the historic theatre. That came in the form of VIP tickets to see last night’s showing of “Tomorrowland.” I was excited to be getting a sneak peak of the movie a day before it’s official opening. When I purchased the tickets, I knew there would be a magic show before the feature presentation and that there was a special display of costumes and props to view after. However, there were also some fun surprises in store. First, there was a raffle for several great prizes including “Tomorrowland” pins, signed posters, baseball caps, and t-shirts along with Ghirardelli chocolate. (Unfortunately, we didn’t win.) This was followed by “The Magic of Imagination,” illusionist Greg Wilson’s all-new magic show. The show was lively and entertaining, focusing on the connection between imagination, technology, and magic.

The next surprise of the evening was the appearance of writer and executive producer Jeff Jensen, composer Michael Giacchino, former Walt Disney Imagineer Tony Baxter, and Director of Walt Disney Archives Becky Cline to answer questions and discuss the making of “Tomorrowland.” I love hearing about how filmmakers come up with their ideas, how they bring those ideas to the screen, and all the twists and turns along the way, so I especially enjoyed hearing tales first hand from the filmmakers themselves.

“Tomorrowland” also happens to be the first film projected in Dolby Vision with Dolby Atmos sound. (You can’t tell me whoever came up with the name “Atmos” isn’t a Doctor Who fan.) The picture and sound were definitely incredible. It was practically 3D without the gimmicks or glasses, and the picture was so clear and immersive, it looked like you could just walk into it. The sound was likewise amazing, mainly because you didn’t notice it. It was perfectly clear without being too loud or sharp.

The last “surprise” of the night was a short animated section of the movie that ended up on the cutting room floor. The piece was a favorite of Jeff Jensen’s and it’s easy to see why, with its beautiful animation and the additional peek into the film’s backstory.

Much like Space Mountain, the movie itself was a fast-paced sci-fi ride. Ryan certainly enjoyed it, which was good enough for me. The filmmakers set out to make a film with an optimistic tone and they certainly achieved that. The ideas that one person can change things for the better and that there is hope for a better future are what I like most about the film. Kids are encouraged to dream and invent, to ask questions and challenge the status quo. If you see something wrong in the world, you don’t have to accept it. You can do something about it. These are all messages kids – and adults – need to hear more often.

After the movie, Ryan and I checked out the props and costumes. (Pro Tip #1: The display is located in the lower lounge past the restrooms. I saw stairs going down with a sign that said “Restroom” and almost missed the display because I thought the stairs only led to the restrooms.) Since Ghirardelli’s conveniently adjoins the theatre, we went through the shop for some after-movie treats. They were passing out free samples at the door! Yay! (Pro Tip #2: Make sure you validate your parking before leaving the theatre. Unfortunately I didn’t validate my parking before El Capitan closed, so I ended up paying a lot more than I needed to.)

I would be remiss if I didn’t mention the theatre itself is beautiful, with old Hollywood glamour and decor. I also have to give kudos to the staff at El Capitan, both on their customer service phone line (which I had called earlier in the day with questions) and at the theatre itself. Everyone was friendly and helpful. (The staff at Ghirardelli’s was also fantastic.)

As we walked out of the theater and onto Hollywood Boulevard, Ryan’s face lit up. He was quite taken with the lights and the energy of the city. Hollywood certainly hasn’t lost it’s magic touch. We’ll be back.